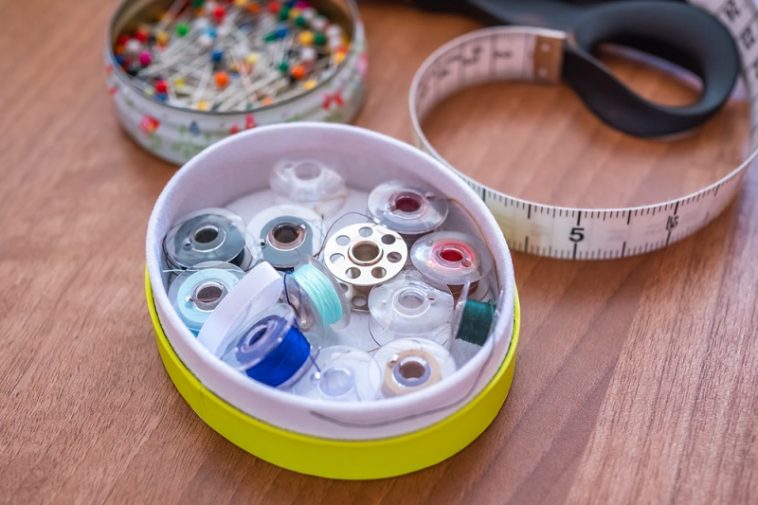 When it comes to thread, there are many options to use when you sew. Polyester or cotton thread is the most popular thread but there is such a thing as invisible thread. It is a nylon thread that blends into the fabric since it is a clear or smoky color.

Can You Use Invisible Thread in Your Bobbin?

Yes, invisible thread can be used in both the needle and in the bobbin. It can also be combined with a conventional thread in the bobbin which is typically more commonly seen. Use the tiniest needle you can get your hands on. Monofilament threads, which are extremely fine and made of a single extruded fiber, do not relax to fill the needle hole.

It takes practice to get the results you want. So feel free to use scrap fabric you have lying around before tackling your final piece.

My Own Invisible Thread Journey

When I was in college, I was asked by my boyfriend to sew a motorcycle club patch on his jacket. He was required to only use the club colors when he was to sew on his patch and because I was just living in a dorm  room, I did not have any other thread color than the white that I used to mend my clothes.

I heard that a girl down the hall had a sewing machine, so I went to her room to ask to use it. She agreed that I could use it, but she also did not have the right color of thread. So, she suggested that I use a spool of indivisible thread that she had left over from a project.

I looked at the thread and kind of got scared. It was plastic and not as pliable as polyester thread. Would it work? The girl, named Cindy, said she would show me how to use the thread and I have never forgotten how easy she made it look.

Unfortunately, she left me alone with her machine when she had to go to class, I did my best to thread the machine with the indivisible thread. Assuming that the bobbin was already loaded with indivisible thread, I started to sew the patch.

Tips For Sewing With Invisible Thread

Twenty years later, I found myself with another invisible thread dilemma. This time, I had to use my own machine; I had not yet learned how to sew by hand.

Use Caution When Filling Bobbin With Invisible Thread

Even though your bobbin winder will not spark flame, the speed at which it winds the bobbin is quite fast. When using an invisible thread which is made from nylon, the thread will heat up and stretch. When this happens, the invisible thread that is very fine, will over fill the bobbin which can lead to a host of issues, such as cracking, breaking or coming apart. I recommend only filling the bobbin half-full when using invisible thread.

Adjust your tension so that the bobbin thread does not show through on the top of what you are sewing. When this happens, the thread isn’t securing correctly, and the stitches will come undone. If this happens, loosen the upper tension. If the thread doesn’t show through at all, tighten the upper tension. Take care that you don’t tighten the thread too much as it will stretch. A looser tension is best when using invisible thread.

Use a Separate Bobbin For Invisible Thread

Since invisible thread requires you to adjust the tension each time you use it, consider using a separate bobbin just for each individual type of thread.

When you fill the bobbin with invisible thread, make sure that you don’t go too fast. In fact, the slower the better.

Going too fast can create enough heat to stretch or even melt the fine nylon fiber, which is never ideal. Go slow. Pay attention to the fact that invisible thread can melt at a much lower temperature than polyester thread.

Use a Marker To Make The Invisible Thread Visible

If you’re like me, and are having trouble threading the indivisible thread because it’s just too difficult to see, try using a marker, like a Sharpie, to color the end of the thread. This can provide just enough contrast to make it much more visible.

How to Adjust The Bobbin Tension For Invisible Thead

In case you are not sure about adjusting your bobbin tension, here are a few tips:

Sewing with invisible thread can be tricky to master. But it’s definitely worth taking the time to learn how to use it. There’s a host of different projects that can benefit from it’s use. Don’t let it scare you away! Grab a few pieces of scrap fabric and start practicing. 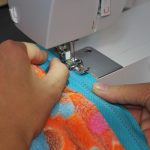 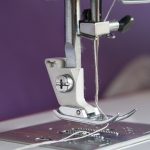