How To Keep Thread From Tangling When Hand Sewing

I suspect few, if any, sewers have escaped the occasional fight with tangled thread during hand sewing. There are several possible reasons for the problem. And for every reason, there is usually a simple solution.

There is not necessarily one single tip that will keep you from ever fighting with tangling thread again. But here are a few tips from myself and others that can help either alone or in some combination.

1.The Perils of Cheap Thread.

Some of the cheapest, generic thread brands may literally “come apart” as you’re using them. Thread is manufactured by tightly winding fibers together. Each tiny fiber tends to grab hold of the fibers around it when wound tightly. It’s easy to see what happens to these fibers when loosened by looking at the faying end of cut thread.

If the thread is made from low-quality fibers or is not wound tightly enough, it may tend to separate and even grab onto threads around it, causing a tangle. So, in the end, buying a low-quality thread can create frustration during sewing, and the thread itself will not be as durable.

Solution: It may help to “condition” the thread beforehand sewing. This can be accomplished by waxing. Beeswax is best for thread and can be purchased at any fabric store or online. One handy substitute is a lip balm containing beeswax. You can rub the lip balm on your fingers and then onto the thread.

One note of caution here. Beeswax can stain some fabrics. Rub a bit on a scrap before using it to avoid unwanted discoloration.

Although conditioning can help any type of thread, it’s best to avoid the really cheap stuff if possible. It will save you a lot of headaches, and your stitching will last much longer.

2. Control the Direction of the Thread Windings.

This tip was a new one for me. I know there are those who swear by this, but I’ve not really verified it one way or another. But it’s still worth trying. It just goes to show that there’s always something new to learn. We should never close the door to a new trick.

The idea is that thread will sew more smoothly if the windings are going in the right direction. You achieve the correct direction by threading the needle before cutting the thread. Then, knot the last end you cut. This ensures that the thread doesn’t try to unwind as you sew.

It seems a bit mysterious, but maybe it’s really a thing with some brands of thread. There certainly are experienced sewers who are adamant about its merits. But the idea would be difficult to use with embroidery thread. I also don’t know about some other types of decorative thread.

I do wonder, too, if left-handed people should thread the opposite end? I’m still trying to wind my head around it.

Going along with the winding idea, if you’re using a double thread, you’ll want to knot each end separately rather than together. If not, you’ll need to allow the needle to dangle and unwind periodically.

Having lived in a variety of climates, I’ve found that humidity can undoubtedly be a factor when hand sewing, especially when using longer lengths of thread. Just as long hair can become crazy in dry weather and stick out everywhere as you brush it, thread can also cling to or repel both itself, the fabric, and your hands as static electricity is built up.

Tangles often occur at the point where the thread is pulled through the fabric. You might have this problem when using a particularly fine thread or with some napped materials.

To stop the thread from becoming tangled at the entry point, use the thumb of your left hand (your right if you’re left-handed) to hold the thread down a few inches from where you’re sewing. It can be surprisingly effective in keeping the thread from becoming stuck as it passes through the tiny opening in the material.  It also allows any slight tangles to correct themselves as you go along.

You may find it helpful for some hand sewing tasks to use a shorter piece of thread. This allows fewer opportunities for tangling and makes the thread easier to control. This tip may be helpful when using embroidery thread to create a border stitch. The heavier thread may require more control when conditioning is not an option.

Also, make sure you are using the correct sized needle for the job. It can make a significant difference. Your fabric, thread, and needle need to all be equal to the job, whether you’re putting in a hem or sewing on a button.

It’s often the small things that trip us up. So, to avoid an ongoing fight with a simple hand-sewing task, take the time to choose the right tools and thread and knot the thread correctly.

Related: Is Hand Sewing as Strong As Machine Sewing? 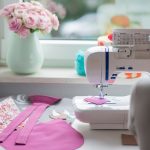 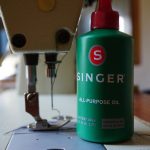